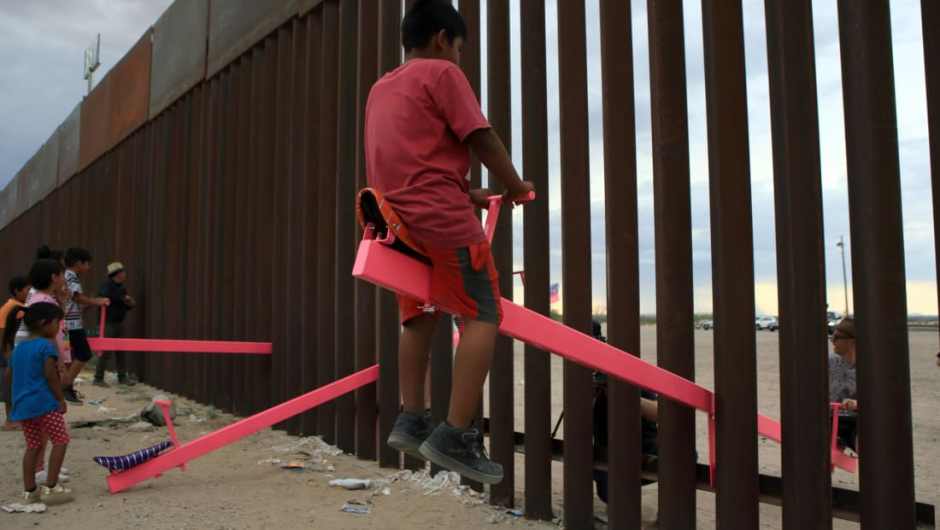 The installation, which took place in July 2019, consisted of three bright pink rockers (or seesaws) placed in the gaps in the steel border wall that separates the United States and Mexico. It allowed children from El Paso, Texas and the Anapra community in Juárez, Mexico, to play together despite the 20-foot wall, which sits on the world’s most crossed border and is a continuous site of political fractures.

The “Teeter-Totter Wall” was designed to illustrate the intrinsic connection between the two lands, and was a collaboration with the Juárez collective of artists Colectivo Chopeke. “What you do on one side has an impact on the other,” Rael told CNN in 2019, “and that’s what a seesaw is.”
Due to the sensitive context of the wall, the project took ten years to complete. It was live for just under twenty minutes, but long enough for it to go viral. Although it was a temporary installation, Rael said on Instagram that the event was “full of joy, excitement and togetherness at the border wall.”

“The seesaw on the border encouraged new forms of human connection,” said Tim Marlow, executive director and director of the Museum of Design, in a statement. “It remains a witty and poignant reminder of how human beings can transcend the forces that seek to divide us.”
Award winners in other categories
The award gave five more recognitions for each of the nominee categories, in “Architecture”, “Digital”, “Fashion”, “Graphics” and “Product”.

This includes a mobile school, called “ModSkool”, designed by the Dehli-based Social Design Collaborative. The project responded to the forced evictions of farming communities in India with a learning place that is easy to erect and dismantle.

The Chilean feminist artistic group, the LASTESIS Collective, also won, which was recognized for its protest performance “A rapist on your way,” which denounces sexual violence against women and the LGBTQ + community.
Luxury brand Telfar was honored for its popular gender-neutral vegan leather bag (priced at the average earnings of a New York DJ for a night’s work).

Medical illustrators Alissa Eckert and Dan Higgins, who work for the U.S. Centers for Disease Control and Prevention (CDC), were honored for an image seen countless times over the past year: their 3D rendering of SARS. -CoV-2, the virus that causes covid-19 disease.

Lastly, Impossible Foods won for Impossible Burger 2.0, which claims to be a more flavorful and juicier burger made from plant-based protein.