The shelf of the unusual 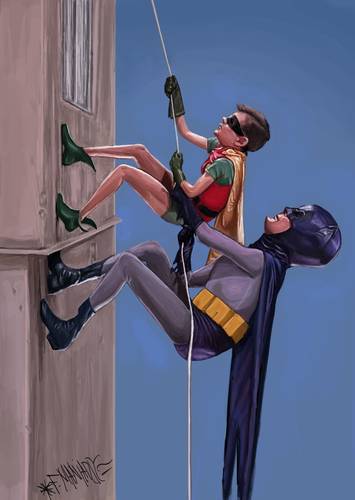 The shadow supposes the adventure. The walker stops and performs the marked rite. His arms are extended, the silhouette begins with a diffuse shape … perhaps a bat.

The boy Bruce goes to the movies with his parents, Thomas and Martha Wayne. The wealthy Wayne are a fundamental bloodline in Gotham City’s business economy. Every decision of yours affects investments, jobs, and the political reassurance of increasingly corrupt leaders that Thomas wants to distance himself from. The family leaves the room, very happy after seeing The Mark of Zorro (Rouben Mamoulian, 1940), with the actor Tyrone Power under the mask. The boy is happy, but they have not just crossed the path to the car when an assailant stops them. They are seconds. Gun flashes light up Bruce’s horrified face. The pearls of his mother bounce off the ground, the faces, just before perfect, bear the mark of fear and pain. Bruce will never be able to fully recover; it will be the act that builds him to be another, much more than an inheriting tycoon. With strategy, training and a hunger for revenge, like the last hero he saw with his parents on screen, Bruce will cover his face, he will be intimidating like the birds that one afternoon hit his face. He will be Batman.

What’s under the mask

Bob Kane was one of the creators who sought to nurture the great comic industry and its heyday at the end of the 30s, with a before and after in the global reach after the success of Superman in 1938. Among many characters (the number of proposals Plots and heroic models did not stop at a specific genre or figure, until a project took color), Kane outlined in line and plot “the skeleton” narrative of Bruce Wayne. Bill Finger, who has always carried less credit, helped him with the final touch-up. It was 1939. It would take time for the identity of the character to feel complete, to finally launch it in the number 27 of Detective Comics, in 1941. “Guest” in the Detective serial, Batman would have his own title forever .

The character’s contrasts make him an object of fascination. There are very serious critical studies to find in Bruce mental labyrinths that refer to orphanhood, the search to consolidate an identity, guilt, the barrier to allow himself the happiness that others do not have, the frustration of knowing that, despite all his battles and improvements, there will always be a criminal like Joe Chill, who murdered his parents (and who, according to dramatic needs, can be The Joker or any other in a comic or film version), ready to liquidate the happiness of another infant. There is, then, no love forever, no serenity after any success, no joy in opulence, dances, business, construction, philanthropic works … in Bruce what endures is dissatisfaction, suspicion, trials in front of the mirror. He survived the bullets that night, but it is more difficult to survive himself. Like all masked heroes, the real unknown is lived without a hood; Who really is bruce wayne? His maxim is to generate a world where Batman is not necessary.

Alfred, the family’s henchman, remains as his butler, acting as a father figure as a prodigy of abilities who will take care of investments, equipment, schedules, facades of nightlife, make stitches or serve tea. Like all the characters and defining moments of the Bat Man serial, depending on the tone and narrative conditions of the story in turn, Alfred may have an exquisite English refinement or he may be a badass war veteran with as many scars as Bruce. These variations open up an infinite number of possibilities for the rest of the characters, who maintain basic profiles, but are modified by the scriptwriter and graphic artists in turn. The same thing happens to Robin as it does to Catwoman, Nightwing and all the ruffians. Alfred on screen has had the notable incarnations of two English actors: Michael Gough and Michael Caine.

The number of talents that have passed through the pages of Batman includes some of the most recognizable names in the field, such as Paul Dini, Jerry Robinson, Dick Sprang, Carmine Infantino, Jim Starlin (author of the controversial and successful installment Death in the family , in which Jason Todd, Robin, said goodbye to the world), Grant Morrison, Jeph Loeb, Alan Moore, Frank Miller, Denny O’Neil and Scott Snyder. The memorable titles are much more than two, such as The Killing Joke, with a script by Alan Moore and strokes by Bryan Bolland; Batman Year One (Batman Year One), written by Frank Miller and drawn by David Mazzucchelli, and, of course, The Dark Knight Returns, script and drawing by Frank Miller, considered one of the best graphic novels of all time, in the that a 60-year-old and retired Wayne is forced to return to his old ways in the face of insane chaos, with a more apocalyptic future.

Several sagas continue to be paid for permanent renewal of readers, such as the extensive trilogy The Fall of the Bat (KnightFall), The Search for the Bat (KnightQuest) and The Bat’s Crusade (KnightSend), which have been the basis for new narrative divisions and source of inspiration. of the cinematographic arguments. Other important series of the “contemporary” time of Batman are The Sword of Azrael, with a script by Dennis O’Neil and drawings by Joe Quesada; The Court of the Owls, written by Scott Snyder and drawn by Greg Capullo, and Black Mirror, with a script by Scott Snyder and the work of two artists: Jock (Mark Simpson) and Franceso Francavilla. Other notable titles are Batman. The Long Halloween (Jeph Loeb and Tim Sale), Batman. Earth One (Geoff Johns and Gary Frank), Batman: Arkham Asylum (Grant Morrison and Andy Kubert) and Batman: Hush (Jeph Loeb and Jim Lee).

Since 1943 Batman came to television, played by actor Lewis Wilson. In 1949 there would be a new series, already with the ally friend of the circus show in Batman and Robin, with Robert Lowery and Johnny Duncan under the mask. Both productions fulfilled only one season of exhibition without much importance, which would change with the 120 successful episodes of the Batman series, which put Adam West as Bat Man in a world of extreme color and parodic exercise full of onomatopoeias (Pum! Whoosh!), Which even made it to the big screen in the 1966 feature film directed by Leslie H. Martinson, with an important cast: César Romero, Burguess Meredith, Lee Meriwether, Frank Gorshin, Alan Napier and Burt Ward, as Robin.

Tim Burton delivered the neo-Gothic version of his character in 1989 (Batman), with Michael Keaton in the lead. A look between the colorful interior of the comic and the enigmatic sobriety of the cathedrals and gloom, with a Gotham close to the design of Metropolis (1927), by Fritz Lang. Even darker and more solid was the sequel Batman Returns (1992). Joel Schumacher changed everything for the show Batman Forever (1995) and Batman and Robin (1999), closer to the wink and wink of the series with Adam West.

On his part, Christopher Nolan consolidated a proposal that tells in great detail the story of the permanent transformation of millionaire Bruce Wayne into the vengeful and righteous Bat Man. As a great cathartic spectacle, but with the intention of making complex the springs that move the impetuous Wayne, Nolan leaves the gothic-surreal vision of Burton, seeking more the devious dark feelings (to “swim” in that class dense introspections there is nothing more than see his film Inception, 2010) by Bruce, paired with the shadows of Gotham City, from Frank Miller’s most sordid and unforgiving vision in Batman. Year One.

With Christian Bale as Bruce Wayne in mega-industrial entrepreneur status, Nolan explores the origins of the legend with his skin exposed to the harmful humidity of a city infected with evils. The series was completed with two flawless pieces: Batman: The Dark Knight (2008) and Batman: The Dark Night Rises (2012). With technical mastery, outstanding cast, visual effects derived from a great production design, it is a trilogy of several wonders. In contrast, not much to say about the expensive, bulky and disastrous installment Batman vs Superman (Zack Snyder, 2016). As the comic and its children flow with another life, some new wonder awaits from the cavernous windpipe of a bat cave.